After installing iTunes on a Windows 7 guest, I would then plug my iPhone into a USB port on my CentOS 6 host. Inside of VMware Workstation 10, I selected the appropriate VM, then from the menu bar I selected VM > Removable Devices > Apple iPhone > Connect (Disconnect from host). This causes VMware to attach this USB device to the Windows guest instead of the CentOS host.
After doing this, I get the following message from VMware: “The Device “Apple iPhone” was not able to connect to its ideal host controller. An attempt will be made to connect this device to the best available host controller. This might result in undefined behavior for this device.” 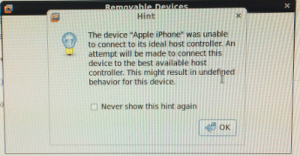 Also, if you open up Explorer and go to Computer, you should see your iPhone listed as a Portable Device.

After browsing files on the iPhone within Explorer (using the iPhone as an internal storage device), I get a Windows blue screen including the message “BUGCODE_USB_DRIVER”. The guest machine crashes while the host remains stable.

Alternatively, if I opened iTunes while the iPhone is attached to the Windows guest, iTunes would display the error “iTunes could not connect to the iPhone because an invalid response was received from the device.”

Ultimately, I resolved the majority of my issues by powering off the Windows guest VM, going to VM > Settings > USB Controller >
Change USB Compatibility from USB 1.1 to USB 2.0. Save and restart the VM.
Every once in a while iTunes does not recognize the iPhone. Usually this can be resolved, by removing and re-adding the iPhone or closing and re-opening iTunes. Sometimes by adding the iPhone prior to starting iTunes.
In order for Sync over Wi-Fi to work, the guest Windows VM running iTunes should to have an IP on the same physical network as your iPhone. Power off the guest VM, go to VM > Settings > Network Adapter >
Select “Bridged” instead of “NAT”.